Introducing an in-depth conversation with Antwerp-based artist, Bent Van Looy whose polymathic life has led him around the globe through the mediums of music and art. His time as drummer with Soulwax, lead singer with Das Pop, and his own solo career dominated his younger years, but now he has returned to his other first love, painting.

Having set up his own studio in Antwerp, the Ghent-born raconteur has now set his creative focus on capturing his ideas on the canvas rather than the stage. Bent kindly allowed us access to his studio to gain a deeper understanding into his eclectic career path so far, and how this has informed his creative process throughout the years. 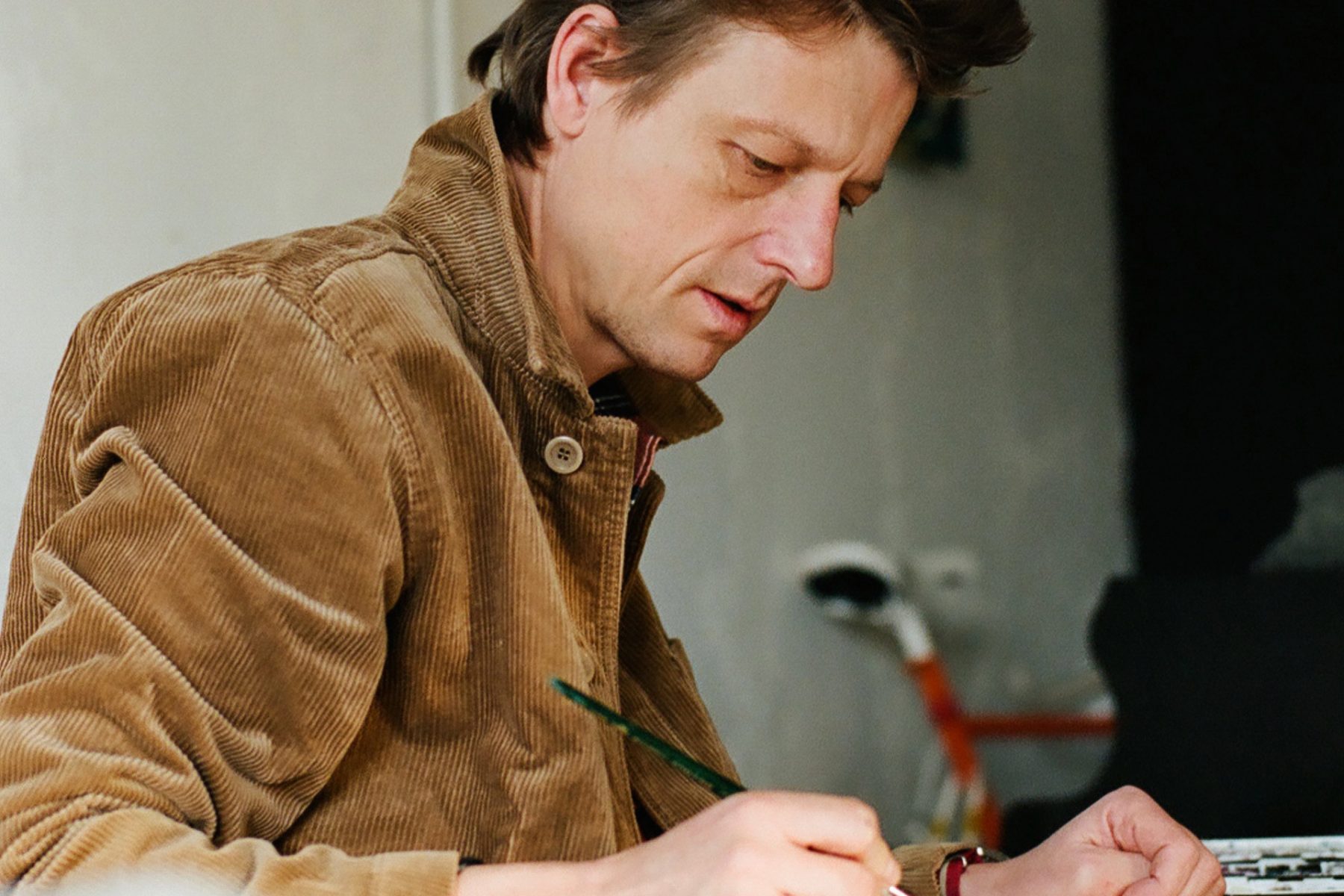 How did you first get started with your practice?

Well, I studied. As a child, from age eight, I think it was pretty clear what I wanted to do. I wanted to become a drummer, and I wanted to draw and paint. So those components were always in place. And I really approached it, even as a kid, as work. When I would draw, it wouldn’t be just to escape reality like other kids might. It was really working towards something. I would walk past the academy in Antwerp with my grandmother and she would point to the high windows and say, “Yeah, that’s the academy.” And I was like, “Okay, yeah. That’s definitely where I’m going to end up.” So that was always a given.

I studied painting as soon as I could. I studied evening classes with adults, I was maybe 15, 16. Just really, really getting stuck in. All the while, playing music as well. So those were always side by side. Very hard to pick a favorite always, but I found out that they can’t exist together, really. I mean, as a kid, they could. Now, not so much. I studied painting in Ghent, and at the same time my band was kicking off, Das Pop. And so when I graduated, I had to ask myself the question, “Would I rather be in a studio by myself, or would I like to see the world with my friends?” And it didn’t take very long to find an answer to that one. So I had some exhibitions, but then I left on a tour which lasted pretty much 16, 17 years.

Only when I came back to Antwerp, which was five years ago, after a 10-year stint in Paris, did I pick it up again. Because I didn’t find a way to make Antwerp work for me. I just tried to transpose my Parisian life on a new backdrop, but that didn’t work. So I thought, “Okay, what makes Antwerp better than Paris?” and that was the low cost of studios. So I thought, “Okay, I’m just going to get some canvases, some tubes of oil paint, and see what happens.” And it’s really opened up this new chapter of my life in the city. 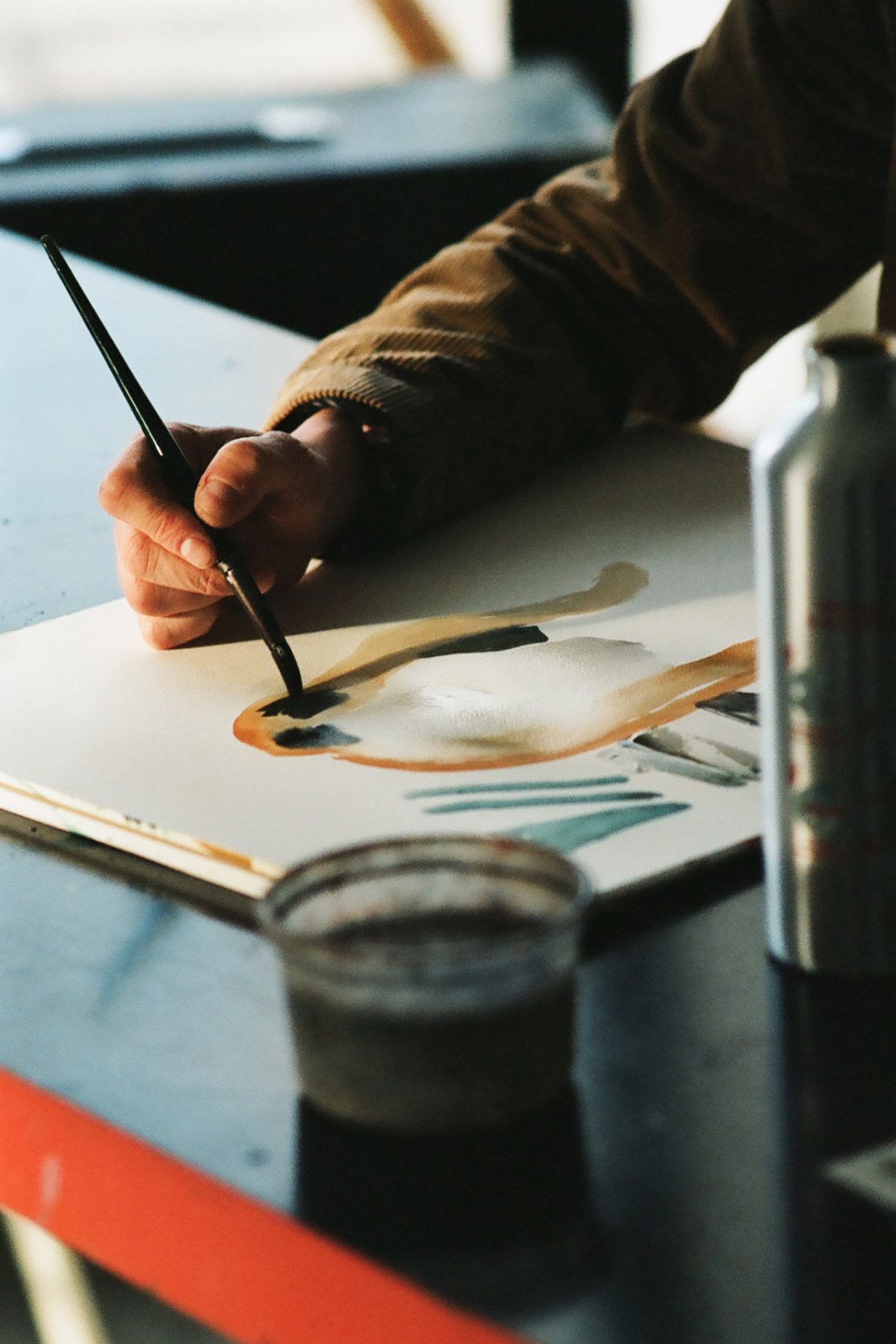 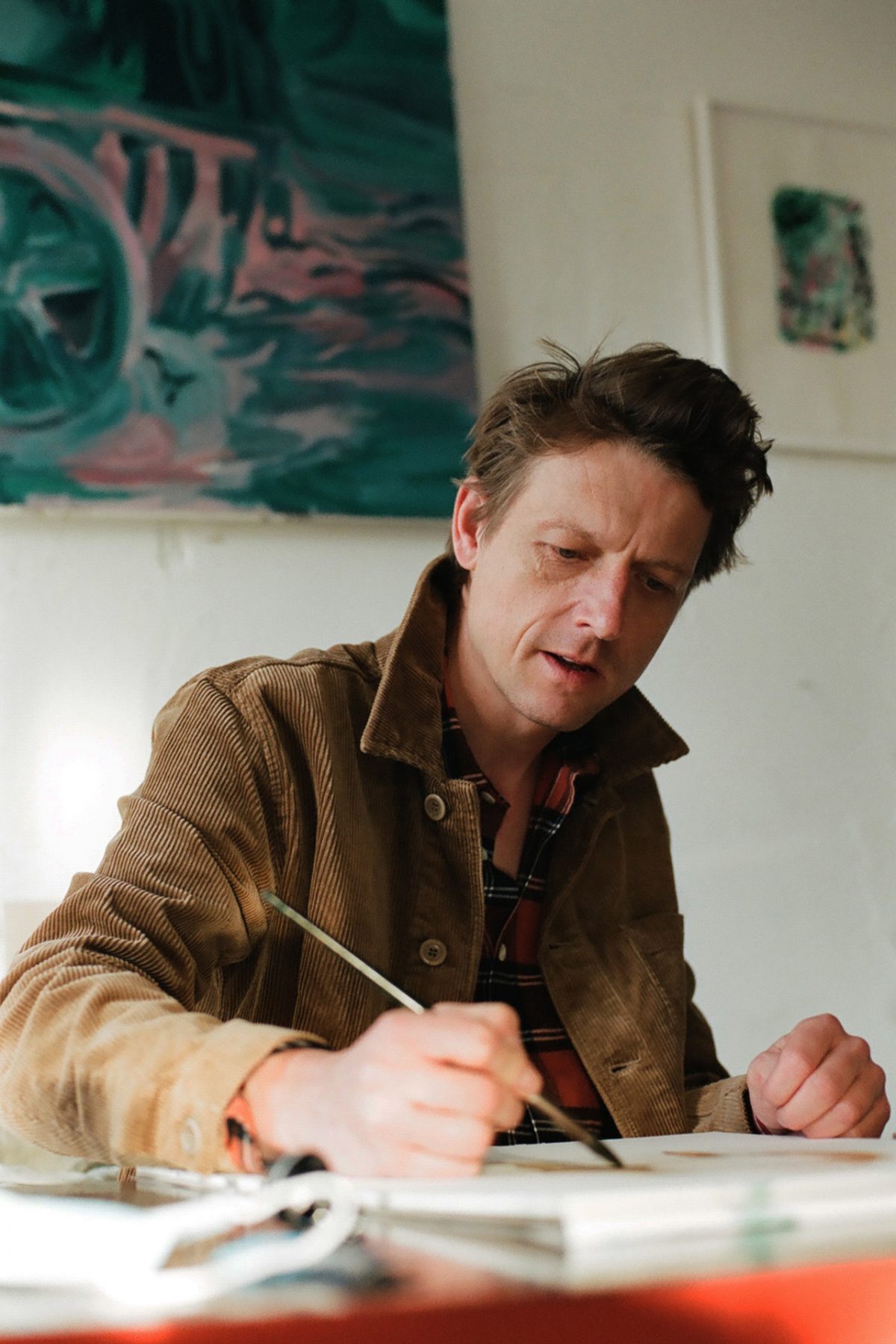 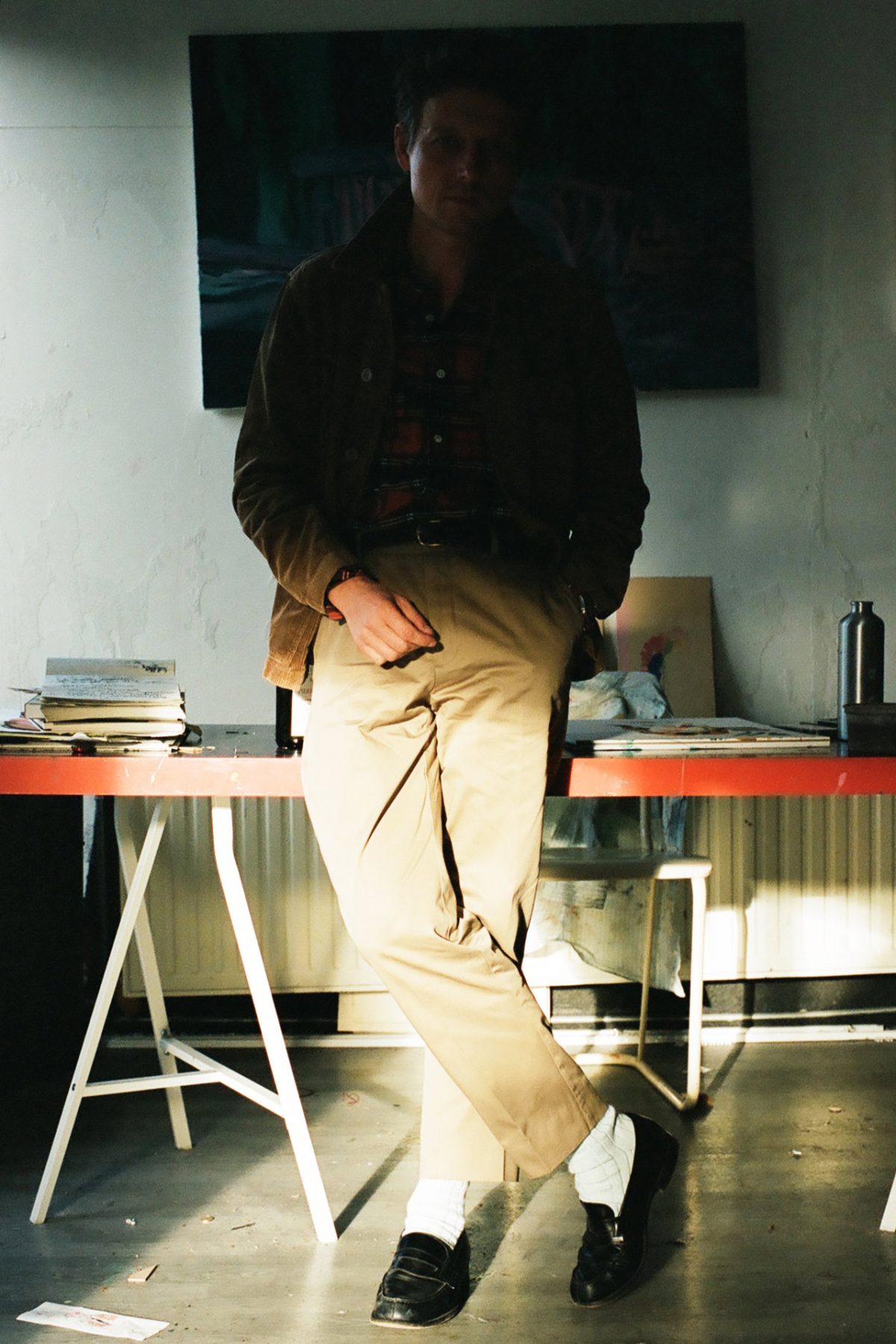 “I’m not a guy who starts off with an idea and then chases that idea until it matches a thing in my head. I like to have the painting lead me somewhere unexpected. When that happens, I’m always really grateful.”

To someone who hasn’t seen your art before, how would you best describe it?

I think it’s very romantic, essentially. I’m a maximalist when it comes to everything I do. When I write songs, I like to use as many chords as humanly possible. Which isn’t always the best, but that’s how I do it. When it comes to painting as well, I try to make something that is riveting. Something that maybe is a little disturbing below the surface, and something that’s instantly seductive when it comes to the colors and the way the brush moves. I’m a romantic that way.

For you, what makes a successful painting?

A painting that surprises me. I’m not a guy who starts off with an idea and then chases that idea until it matches a thing in my head. I like to have the painting lead me somewhere unexpected. When that happens, I’m always really grateful. Because you do get lost when things are clicking and it’s working, you do get lost in the process. You wake up from this trance, in a way, and you’re just baffled by what’s happened. That’s a good day. 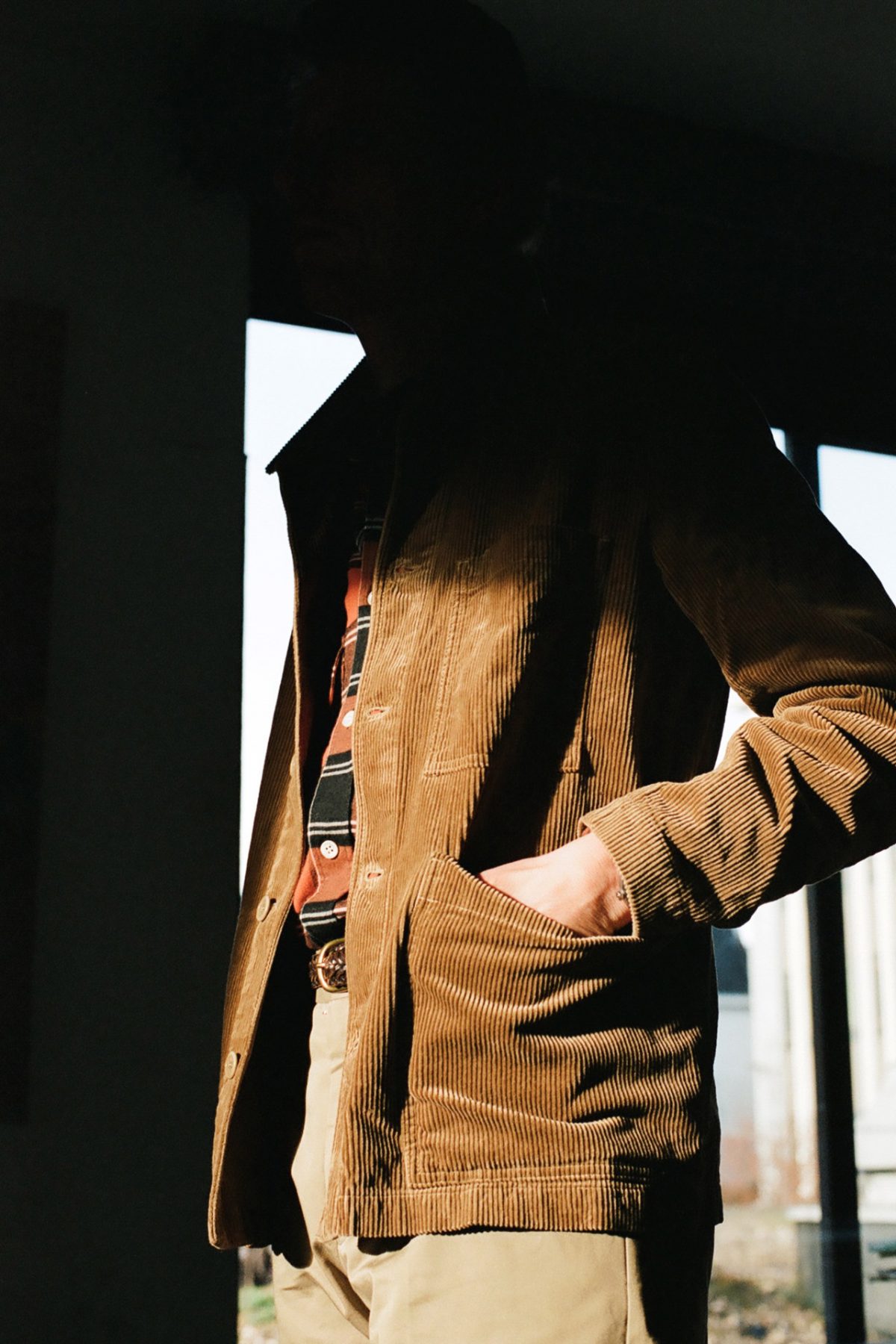 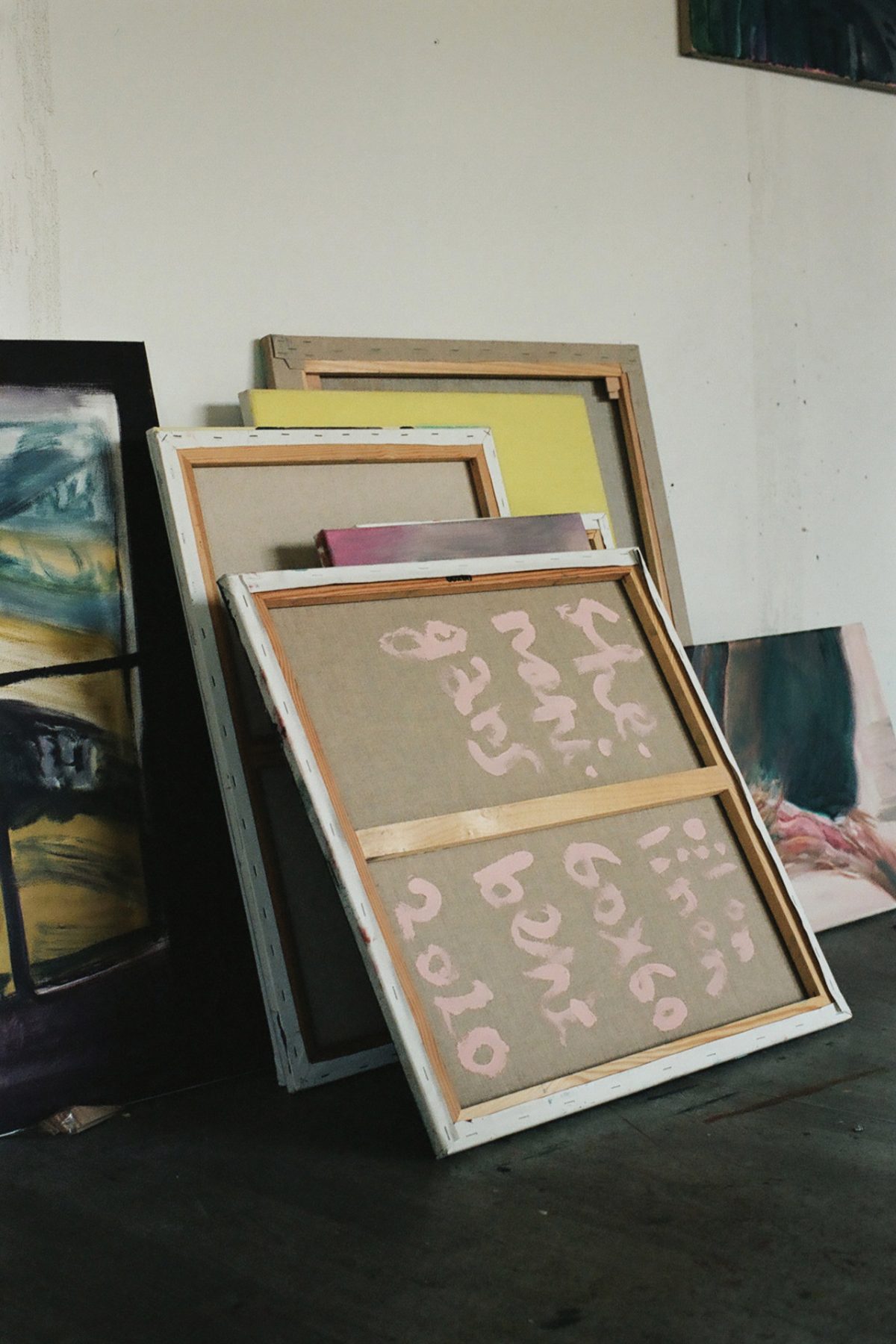 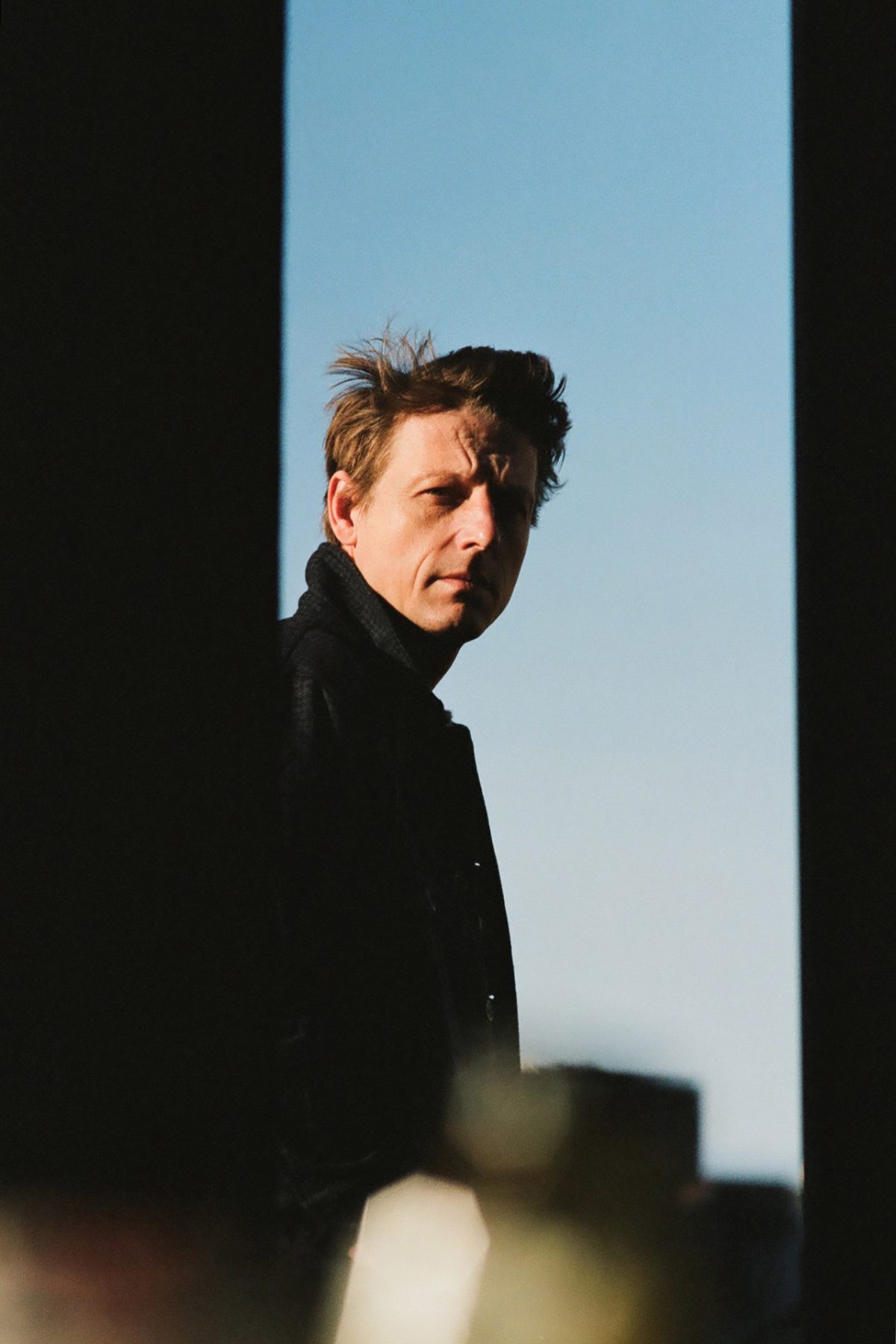 Has your idea of what you want to create deviated over the years?

I think so. I mean, I think literature has always been a part of it. When I started out, was like the late ’90s, I was really into all the Generation X type literature. And I really wanted to convey this kind of alienation, this weird discomfort with the times we live in, and all that. Whereas now I like to think I’m becoming more personal. Both tapping into, I think, stories I heard in my childhood, and being a father telling a lot of stories. And that seeps into the painting, I think.

You’ve had a wide-ranging path into various creative endeavours and this diverse list shows how valuable it is to be a polymath. How have you balanced this patchwork of music, design and art over the years?

The thing with the energy between playing music, being on tour, and being in a studio is really the opposite. So music is a very social endeavor, lots of energy, lots of traveling, quite aggressive. Whereas for painting, I really need some quiet, and a certain focus that is just impossible to conjure up when you’ve just come back from tour. So that’s the reason why I didn’t paint at all in those music years. I mean, I tried, but it was only half-assed work. And I just figured, “Okay, I’ll just not do it instead of making bad art.” And now I find myself not writing any songs at all. So I think the reservoir can only be used for one thing.

I still play shows, which is nice, because you get out at night, but I’m not writing any new stuff. So the energy is really completely different. I get to create these moments for myself where I now allow myself to paint. It was always in the back of my head, “I’ll get back to it. I’ll get back to it when I’m old.” So I’m old now, yeah. 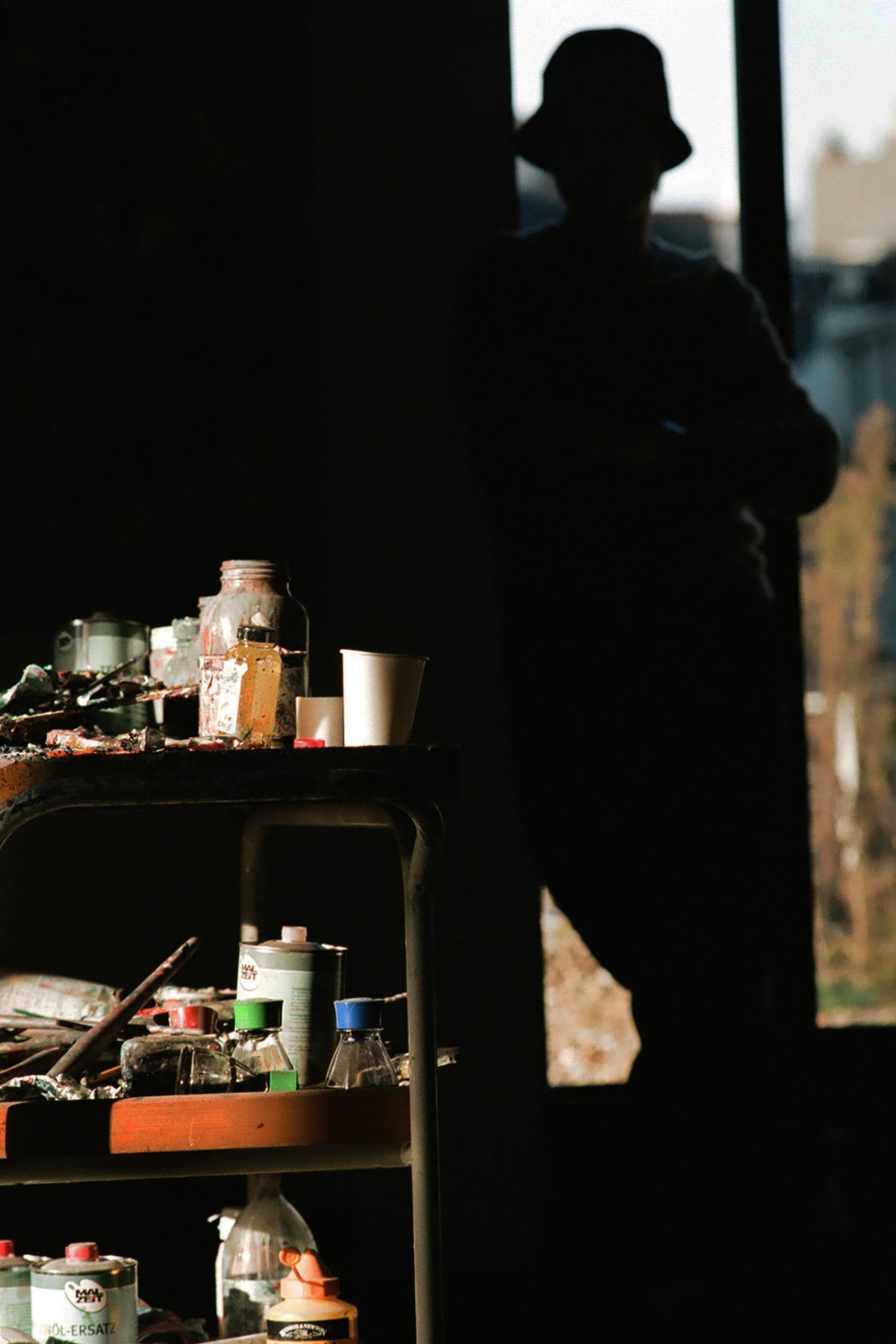 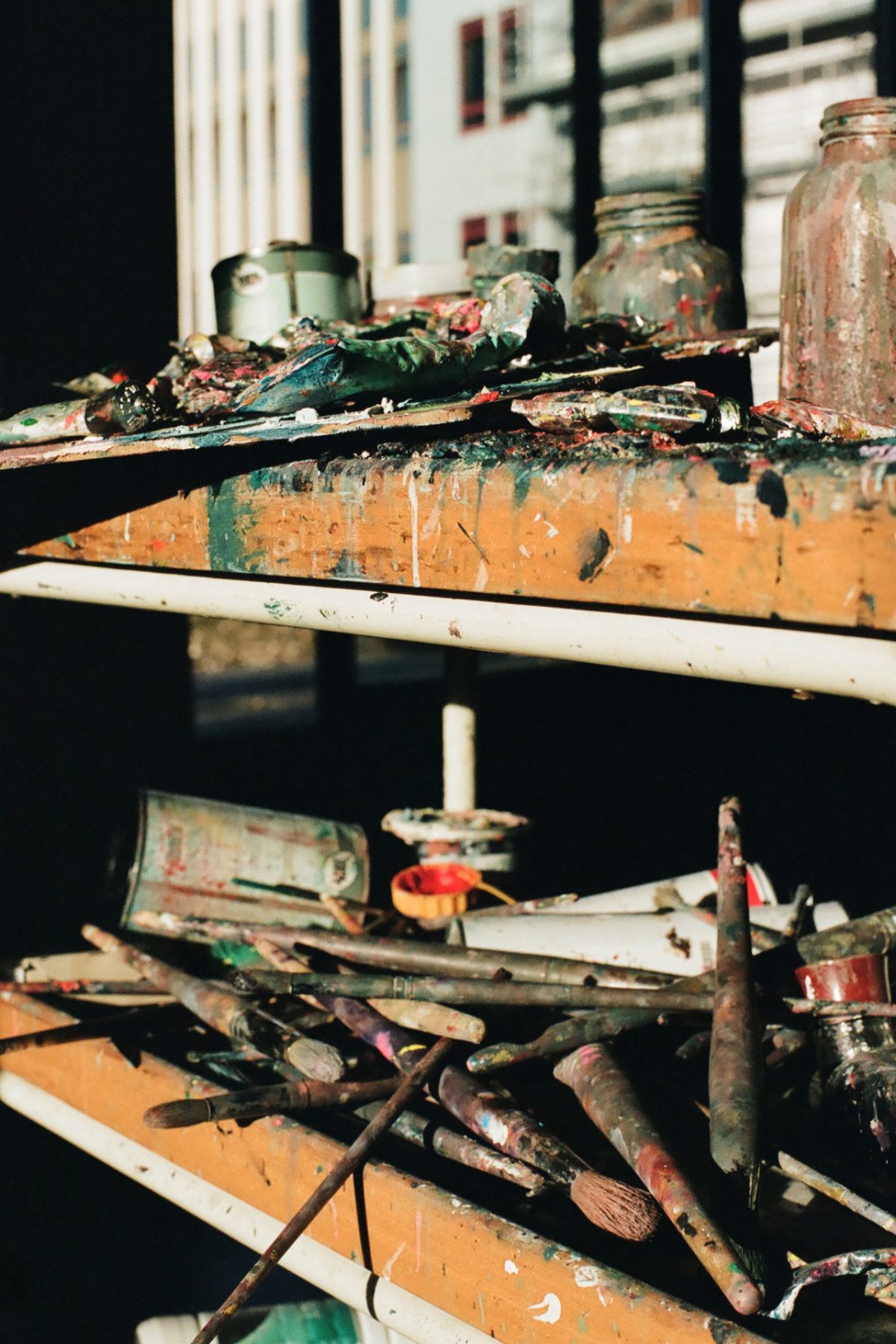 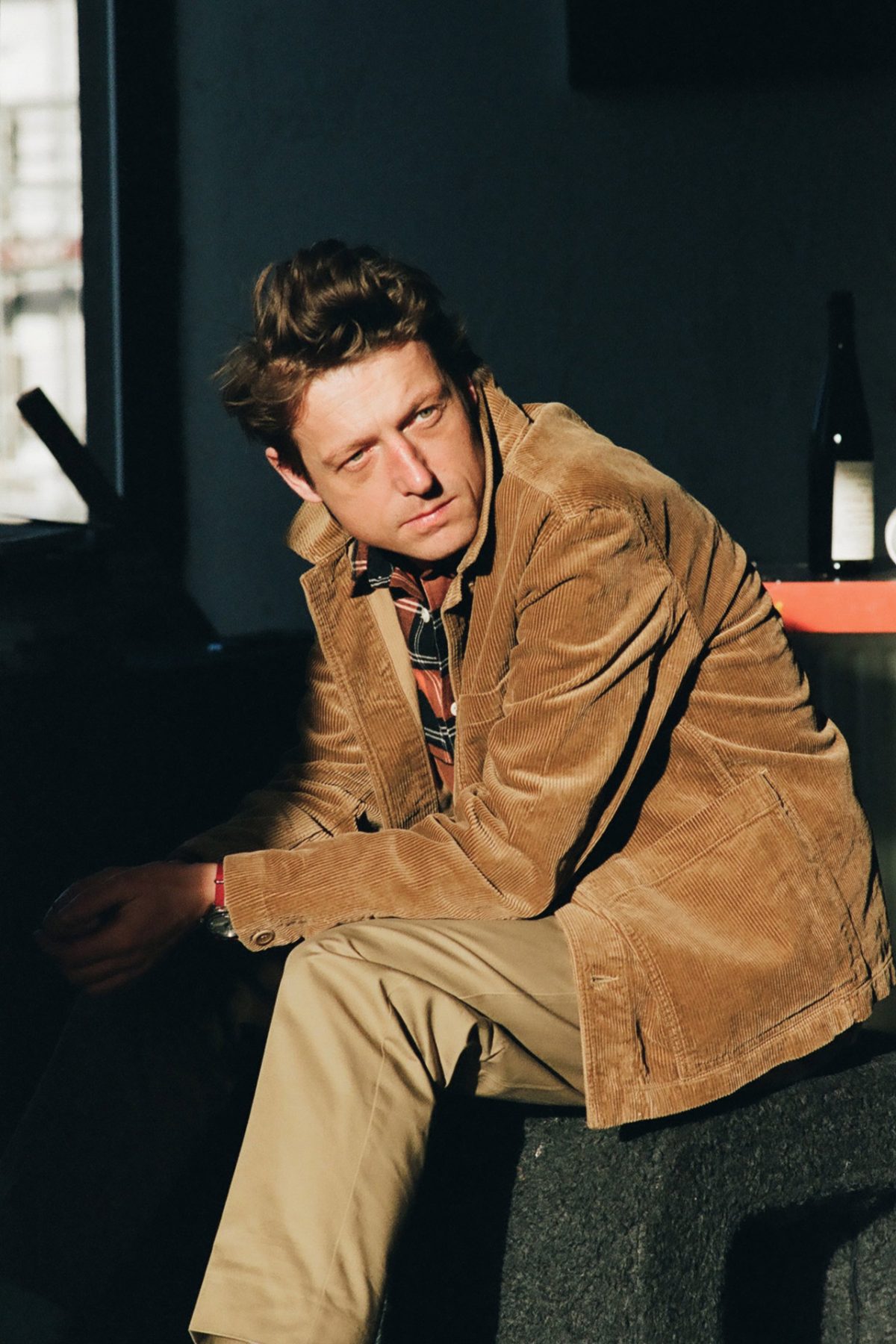 “I have to admit since I started painting again, I do look at the world differently. I see things as a painter. Maybe it sounds pretentious, but it isn’t. You train your brain to adapt and to look differently.”

How has the city of Antwerp shaped your art and life in general?

I think quite a bit. Antwerp has a very lively art scene, great galleries and great artists as well, it always has done. So that’s probably one of the reasons why I decided to pick it up, outside of the practical reason, the cheapness of the studios. But Antwerp is a small city that likes to think of itself as a large city. So it’s a very ambitious place. A place where hard work, fashion and industry is important. So it’s very different from Ghent where I studied art, which is much more laid back. It’s a great incubator for a young artist to start, but I think Antwerp is more of a working town.

How does clothing inform how you see yourself?

A lot. I think I’ve always attributed magical attributes to pieces of clothing. Even as a child, when I would wear a certain thing, I would become another version of myself. Or a better version, or a version that was more equipped to face the world. I remember asking my mom when I was maybe eight, nine, to make me a farmer’s uniform and I would wear this to school. I would look like an Astrid Lindgren character with wooden shoes and all that, filled with straw. Everyone would laugh at me, but this was the way I could face going to school and face the world. Just the power of putting something on, can really transform the way you are in the world and the way you see things. And that’s still the case. I mean, I can see a jacket somewhere that I can live with in my head for weeks on end. And whether I buy it or not, it informs the way I am in that time.

Are there any other artists who inspire you?

Yes, although not literally. I mean, not stylistically, but I was just blown away by the big Hockney exhibition in Brussels now. I mean, he really shows that it’s all about looking, and about really seeing, and about perceiving the world. And then he translates it in a million different ways, but the act of looking, and seeing things as a painter, that was really mind-blowing. I have to admit since I started painting again, I do look at the world differently. I see things as a painter. Maybe it sounds pretentious, but it isn’t. You train your brain to adapt and to look differently. 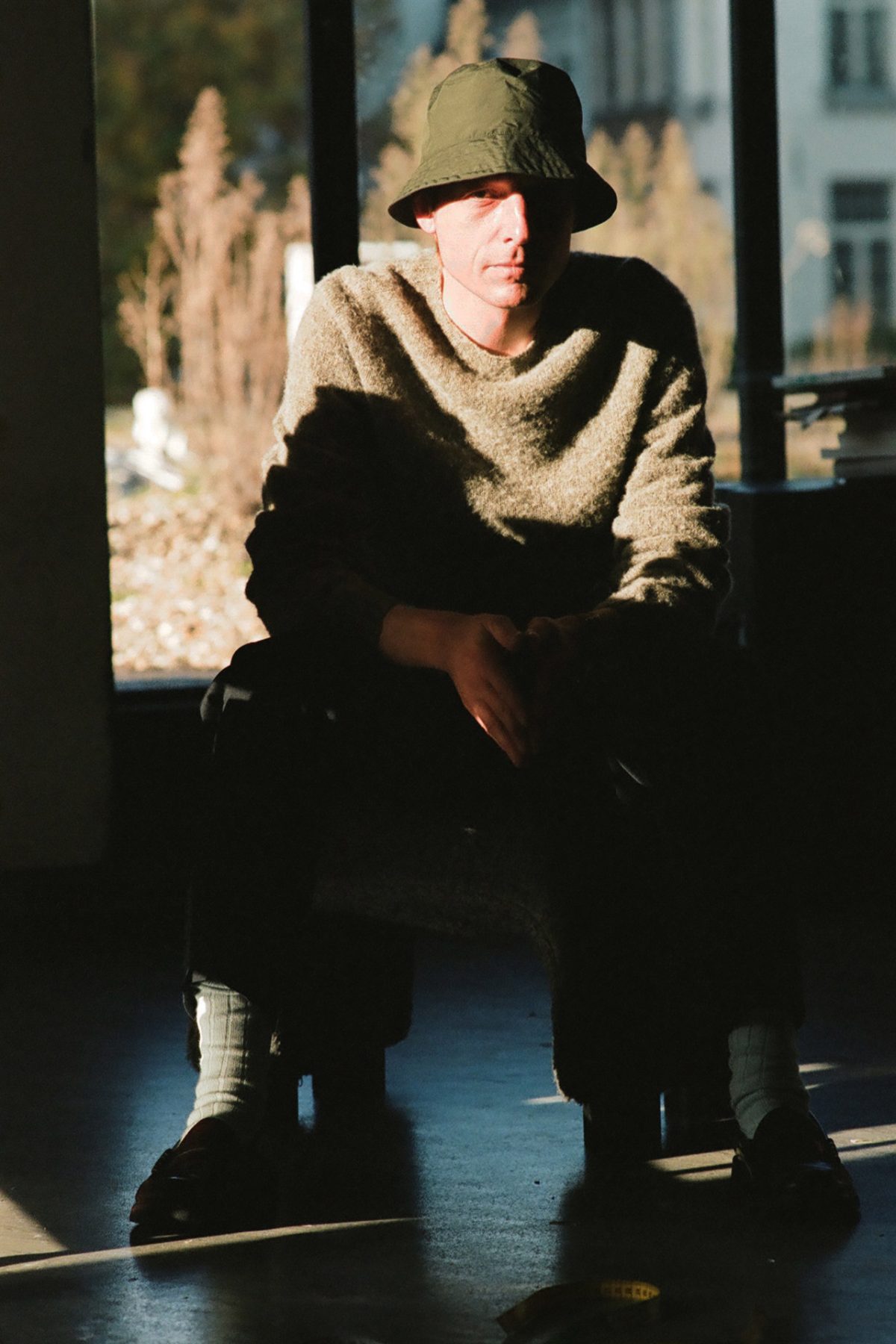 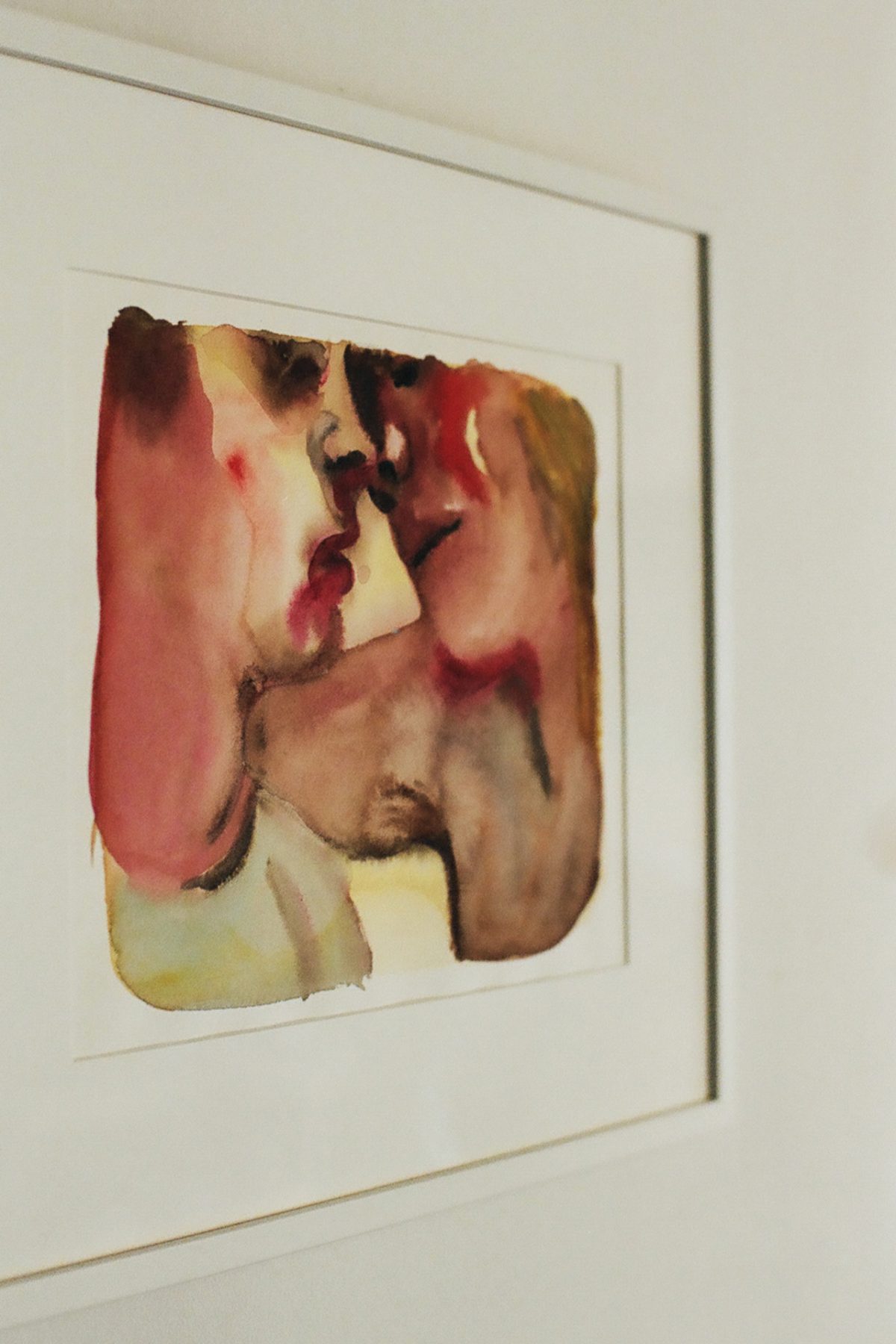 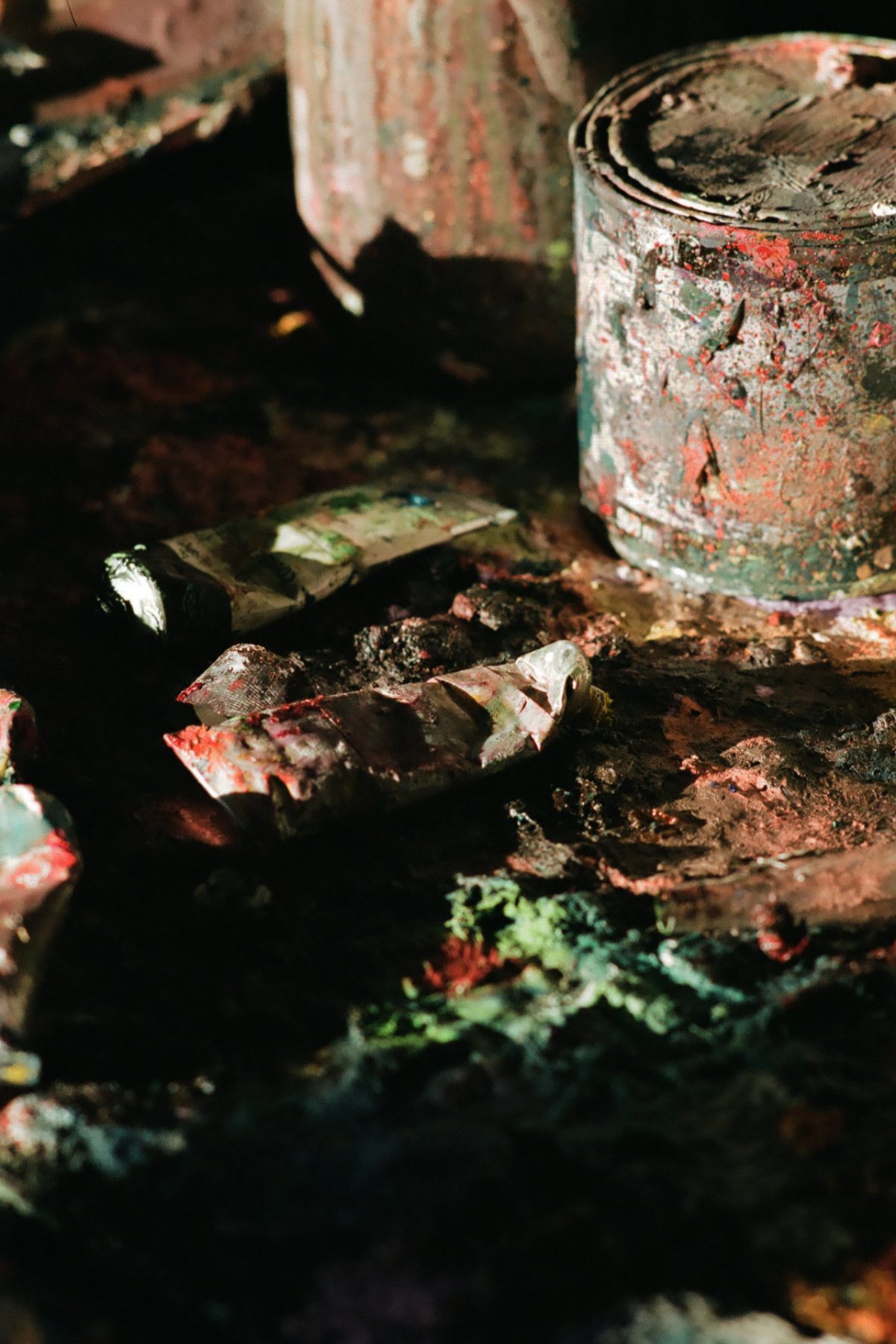 You’ve been the drummer with Soulwax, the lead singer in your band Das Pop, had your own solo music career and now are pursuing your artistic endeavours, are there any other creative avenues you would like to explore in the coming years?

The thing is, I find it very hard to focus on one thing. I greatly admire artists that are just so monomaniacal and they can do it, just focus on one thing and be the very best in the world at that. But it’s never been me. I get too excited when a possibility arises. Or when someone goes, “Hey, would you like to write a short story?”, instead of going like, “No, I’m a painter. I don’t write short stories.” I’ll go, “Yeah, sure. I’ll give it a go,” and that stuff excites me. I have to say, keeps things fresh as well, because you have to work on the tip of your toes, always. Make the best work you can whilst it’s dangerous, it’s without a safety net, it’s taking risks as well. And I guess I like that.

I guess just having found this rhythm that really works for me. I’m a father as well, so I have to take care of two small children and had you told me that I would be a guy dropping off his children at 8:30 in the morning, and then, like an office worker, going to the studio at 9:00 until 4:00, I would’ve laughed at you, because I was very much a crazy musician. But I find that this really does work for me, and that’s been a revelation. 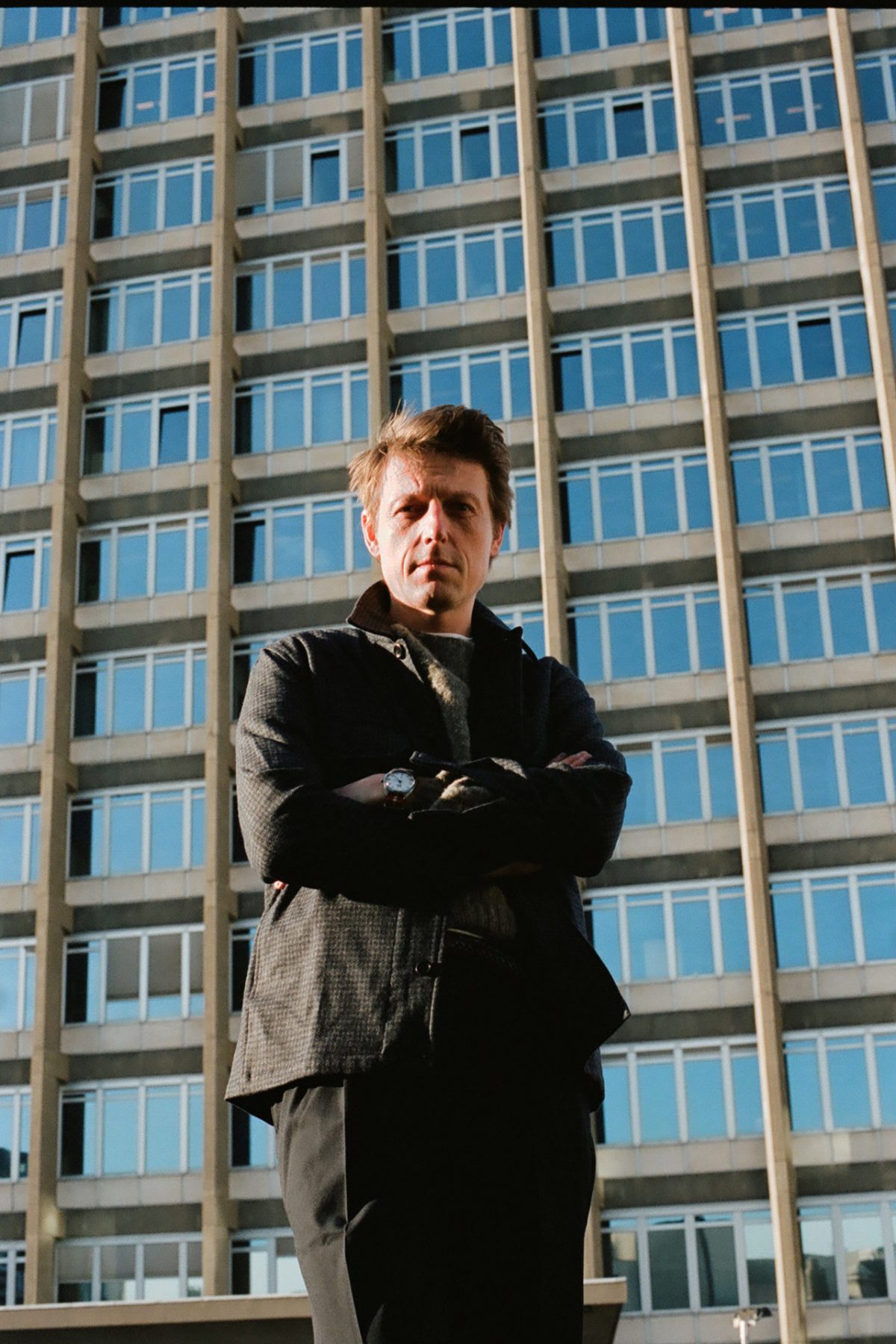 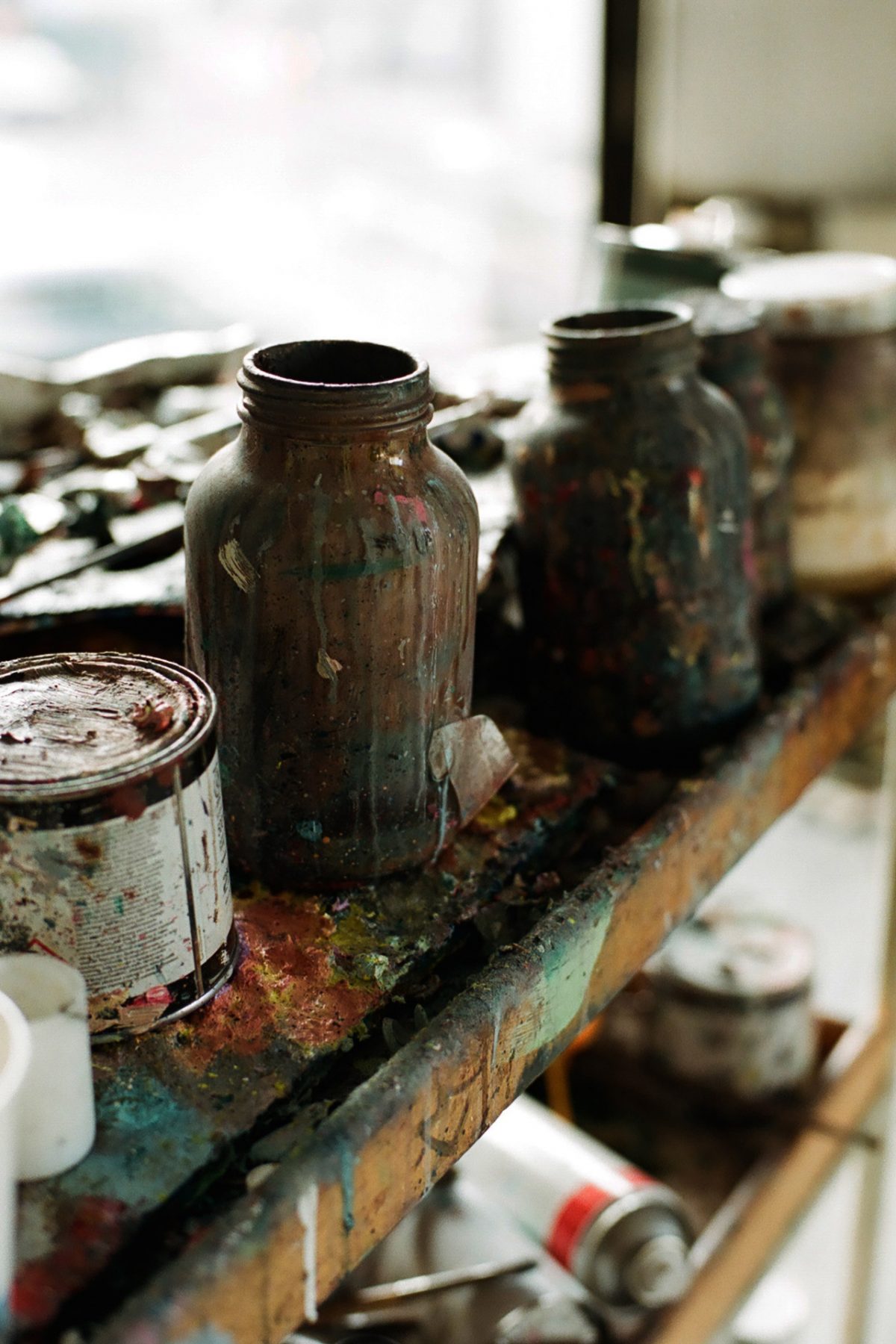 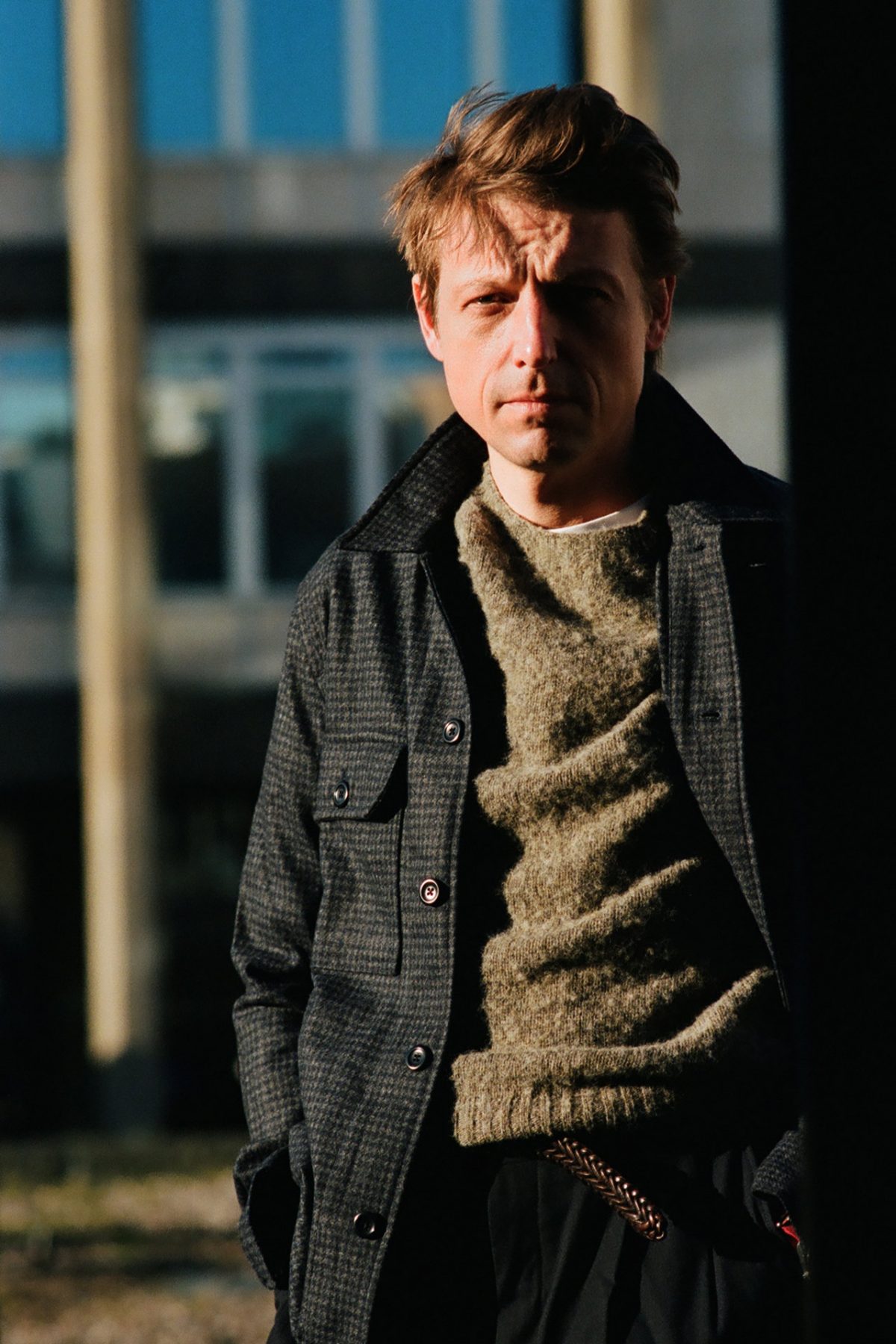 Did becoming a father alter the way that you approach your practice?

Yeah. I mean, the whole bohemian, “Let’s see what happens.” is straight out the window. You have to focus and use the time you’re allotted. And so that’s what I do. I work in a more concise, more focused way.

I’d like to relearn how to work on a bigger scale. When I had just graduated from art school, I wouldn’t paint unless it was two meters by three. Whereas now, I tend to work really small and I’m finding it difficult to work on a bigger canvas. So that’s the challenge for 2022. 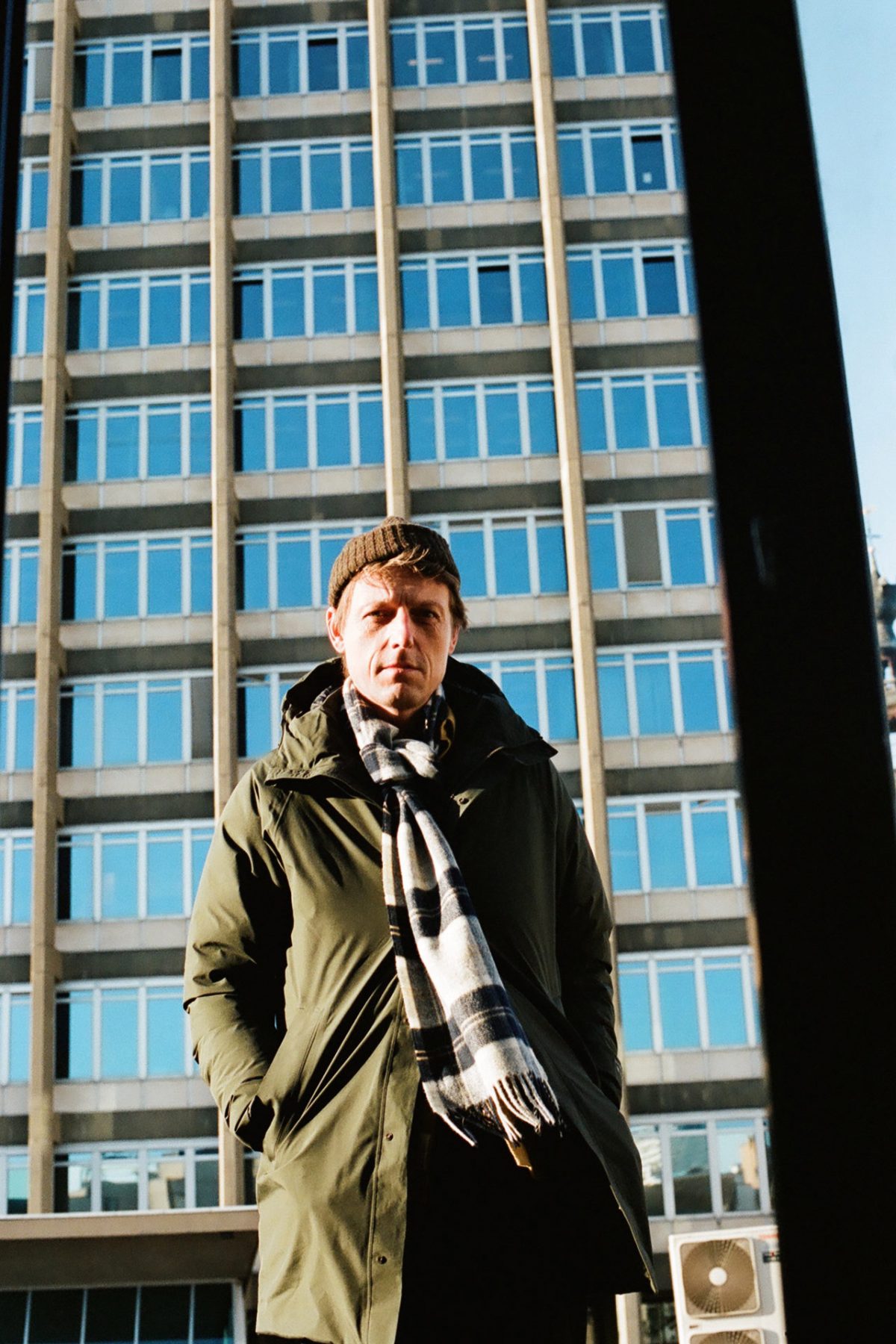 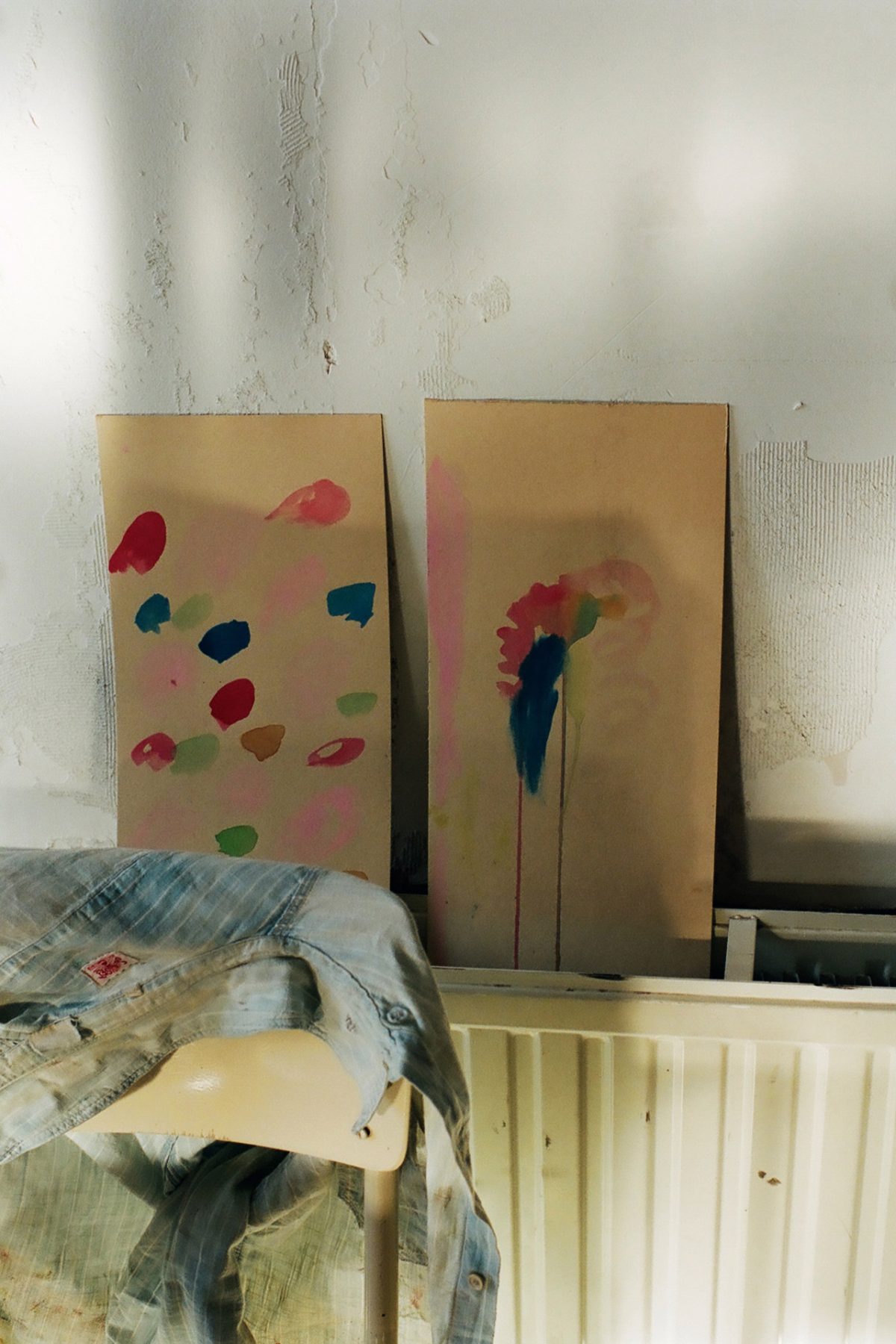 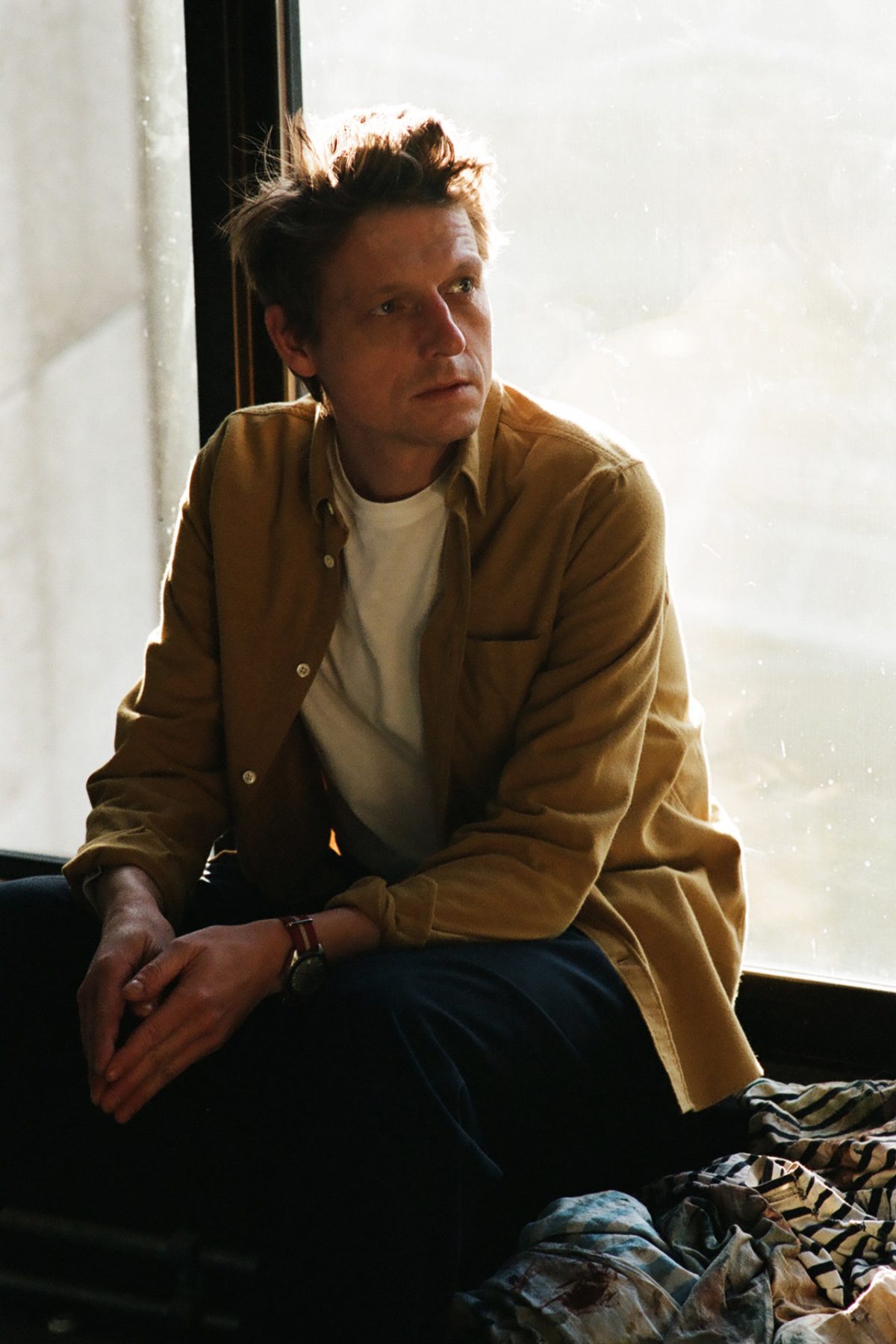